Introduction:
I always love that period after a long winter, replenishing the fly box in anticipation of an action packed day on the lake or river. It’s like a calm before the storm. Most tackle companies have finished their product development and testing phases and are awaiting their new stock, as they work on branding. As anglers, we are excitably trawling the internet and social media for rumours and living off scraps of info that some of the reputable fishing magazines are teasing us with before release. Having been in close contact with the guys at Fishtec and Airflo, towards the end of last season I was aware that the Airflo Super Stik 2 was in the advanced stages of development after the original model had just turned 3. The last we left it was that they’d be in touch.

Fast forward to pre-launch and I am waiting on the first rod to test this new season… the Airflo Super Stik Mark 2. It was quickly put to me that it was designed for the angler who likes a bit of feel in the rod, with a quick loading progressive action which is perfect for top of the water work. I have to be honest as the years go on, I still can’t help but feel a sense of impatience mixed with excitement when somebody says they’ve either got me a present or something to try. It’s one of those childish traits that you never let go of.

Pre Conceived Opinions:
I genuinely didn’t know what to expect and given the lack of public opinion available in both printed and digital press, I had no myths to debunk, everything truly was a first impression with no preconceived opinion as I normally had.
As an angler, seeing a remake or a second edition of a rod, i normally feel underwhelmed. Is a remake similar to the child living off the name of a famous parent? Or has it got the capability of making a name for itself? 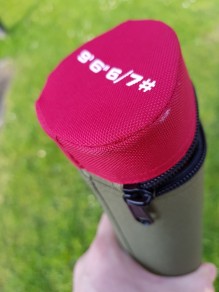 First thing that stood out for me was the rod tube. A rounded off, triangular shaped cordura tube with a dual colour of subtle olive and bold red. I’d expect not many would pick up on this one, but this set the tone for me regarding how much thought went into the production phase. How many times have you set your rod tube on the bank, in the car boot, or on the car roof (I know, I know), only for it to roll as you fiddle to close the car doors or simply roll down banks etc? Well now it doesn’t. It sits pretty and doesn’t move anywhere. That also affords some extra protection when it comes to leaving something somewhere and it’s still there where you left it, without the thought of it rolling off somewhere or dropping somewhere. So simple and pleasantly surprised that quite a few companies haven’t picked up on this. So if you are reading this, take note.

The Rod:
The very subtle olive sheen immediately pulled me in. The last rod i felt drawn to by the look alone, was the Wychwood Aura around 2006. I, like most anglers can be very fussy with rod colour, but we were already off to a good start.

The rod itself was a 3 piece 9ft ‘6 #6 wt and some perfect colour co-ordinated decals and branding. A lot if you ask me, but it does not look out of place. Very much like racing car branding. The NASCAR of the angling world perhaps in that it retained it’s good looks and purpose, despite the decoration? A lot of people seem to allude to the idea that less is more concerning subtledty of branding,  but i genuinely like the bold statement that it makes across this rod. A bit of a marmite, love it or hate it moment.

The reel seat is fairly basic, and all feature a full wells handle and fighting butt (unless you opt for the 9ft #5 then you don’t get a fighting butt). But the unique feature of a composite cork handle did not mean much to me either, that is until i researched how this feature was beneficial. For those of you who are still scratching their heads, a composite (i will recap from a previous blog), “is a material made up of more than one substance“. Composite materials can have different properties, depending on the required usage. They can make things lighter or durable for example.

It wouldn’t be what i call a priority feature and be on a list of things i would look for in a rod before purchase but is indeed something that i would say adds to the lifespan of the rod. The striped composite area tends to sit around the top of the handle, where you would normally place your thumb. It’s an area that you wouldn’t expect to have wear and tear but do consider the amount of times it gets soaked and dried out during a session while your thumb is there.  I can relate to having a really good Scierra Avalanche being damaged in the very same area many years later, eventually rendering it unfishable, so it’s good to see companies thinking ahead, even if it is a small addition.

The rod guides and alignment:

Lower down the rod we have a couple of inlined stripping guides as most rods have. These are useful in that they help distribute line to the other guides but also minimise stray line colliding with the rod during a cast. These progress into lighter snake eyes as expected and then onto a standard tip guide.

Alignment dots on blanks has become a wider feature of rods over the past few years and it’s great to see that continue as they feature on this rod. A quick glance can determine whether your blank is attached correctly.

Casting:
The rod is marketed as a mid-tip action rod and i personally felt i could load rapidly and distribute very easily with as little effort as possible. A lot easier than i am used to. It does feel quite stiff at first but don’t be fooled by that.
I casted in the confined spaces and took it to some of the most rugged and unforgiving fisheries across Northern Ireland and was still able to actively target fish, despite the conditions. I am not saying this rod will actively improve your casting but once i got used to it, I found i was able to get slightly more distance from the bank once i felt the blank loading on the back cast. 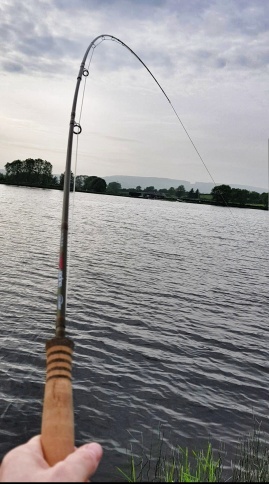 My personal tip is to double it up with a good line if you want to get the full benefit of the rod’s capabilities. I personally used the Airflo Super-Dri Xceed Floater Available Here which really allowed me to go farther than normal but crucially, remain in control. It’s heavy front end taper, combined with the rod’s action gave me extra yards where it mattered. Each to their own.

Playing:
What i did find about the rod is that it did subdue and bully fish quicker than some of the cheaper rods on the market. I’d say this is useful for the competition fishermen who need to land quickly. I felt always felt that i was in control when the fish were on, including the acrobatic ones! There is seemingly much less bend than the Wychwood RS, despite being of similar action, but what it lacks in bend, it gives you a bit more confidence that it’s a sturdy rod. In short, you are the boss!

Opinion
Followers will say that i said similar about the Wychwood RS. The Super Stik 2 therefore  had a lot to live up to. I make no secret of the fact that the Wychwood RS was the rod to beat last season and I very much fell in love with it. Even when testing other rods, I tried to detach and found myself crawling back to it like the guilty party in a dodgy breakup. However with most dodgy breakups, a new relationship blossoms and the old relationship finds itself being fading out in the background. I make absolutely no secret of the fact that this happened as i tested this rod. I found myself instinctively lifting it instead of my RS, without a thought. That’s not to say the RS isn’t any better or worse, i just genuinely liked the feel of this rod as i casted it.

In fact one of the best compliments given to this rod was from one of my good fishing partners who took a few casts and immediately commented how it reminded him of the new Hardy. That’s some accolade.

But while we are on the subject of comparing it to other rods, I will go back to the RS, if/when the novelty wears off because for me, they are 2 very very similar rods. The Super Stik 2 would marginally feel a bit sturdier, whereas the RS has marginally more movement. Both useful attributes, depending on the terrain that you will be fishing in (even though both are more than capable in any terrain but i am talking more about the psychological aspect of the angler here).

It remains to be said that this for me, is certainly one of the surprise packages in the rod market this year. For some reason, I also feel that it has very much went under the radar.
I remarked earlier “As an angler, seeing a remake or a second edition of a rod, i normally feel underwhelmed. Is a remake similar to the child living off the name of a famous parent? Or has it got the capability of making a name for itself?”
In this case the Super Stik 2 is more than capable of making a name for itself. It not only goes toe to toe with one of the most highly rated rods of 2017, but one of the biggest brands in angling. Therefore it provides outstanding value given the price difference between the three rods!

If you are still reading and interested then Buy it here

Key points:
-Strong and sturdy throughout (Does not look or feel cheap)
-Bold design, branding – Super Slick
-Great to cast, easy to play
-Innovative rod tube but can be quite big if you get a 3 piece rather than a 4 piece option.
-Offers “bang for your buck!” Holds itself well against the big boys!